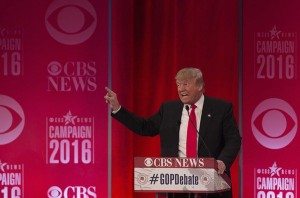 If Donald Trump manages to not lose support after making such a statement during a GOP debate, it’s highly unlikely there is anything that will stop him from securing the Republican nomination. Real Clear Politics shows Trump with a 19.3% point advantage in South Carolina with under a week before the election. Typical of Donald Trump, he spent the night launching attacks against his opponents.

While Senator Ted Cruz did defend against Trump’s attacks, he seemed to step back when countered with further critique from the business mogul. Often times the Republican field has cowered, allowing Trump to bully them.  His main strength has been the inability of the likes of Carly Fiorina, Rand Paul, Jeb Bush, and Ted Cruz in retorting against Trump. This was the first debate where both Senator Cruz and Governor Bush attempted to stand-up to the relentless Trump.

While Governor Bush was able to land those lines, he quickly retreated after Trump simply said, “Excuse me.” This was another occasion where Jeb Bush could not come out on top of an exchange with Donald Trump. His points do matter, but his lack of strength diminishes the effectiveness of the message he was attempting to convey. Neither Governor Bush nor Senator Cruz were able to parlay their exchanges with Trump into anything significant.

Other Points of Interest

This exchange over amnesty between Senator Rubio and Senator Cruz was even more heated than previous between the two. The entire discussion seems to be out of touch with how the American populace feels about immigration, especially the Hispanic voting class. The argument between the two is slightly ironic as both are sons to Cuban migrants. However this war of words highlighted the tone and theme of the night – Donald Trump, Ted Cruz, Marco Rubio, and Jeb Bush spent the entirety of the debate launching attacks against one another.

Ben Carson was largely absent, expect for a strange answer where he stated the Constitution is unclear if the President can nominate Supreme Court Justices, he would go later to clarify 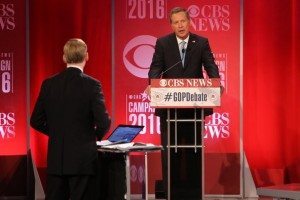 himself stating the framing of the question was odd. On the other hand, Governor John Kasich stayed out of the arguments and called for his opponents to remain civil. He also delivered a message of him being able to reach out to Independent voters and sounded much like a compassionate politician.

After his second place finish in New Hampshire, Kasich has begun to play to his appeal to Moderate Republicans and Independent voters that are turned off by the petty squabbling of the other candidates. He was the only candidate on stage that came off Presidential with a willingness to govern. On that merit, he was the winner of the debate as he was never drawn into any of the mud slinging and proudly defended his record on expanding Medicare in the state of Ohio.

If Kasich was able to show enough during the debate to place second in South Carolina, he can start pushing the narrative of the race for the nominee being between he and Donald Trump.