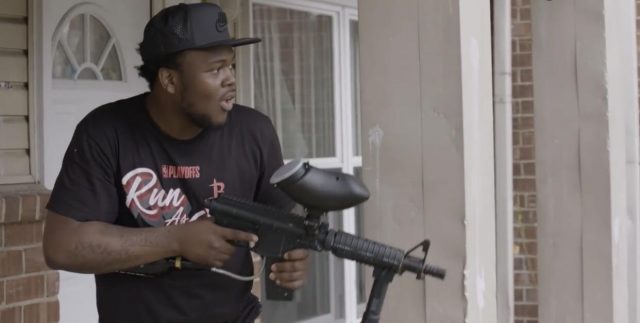 Police in several cities across the U.S. are trying to put a stop to men waging paintball battles as a part of #PaintballsUpGunsDown. an anti-gun violence campaign police are calling misguided.

Stepped up Detroit police enforcement is planning to quell the social media-publicized citywide paintball war. So far this movement has resulted in six arrests and left an unmarked patrol car splattered.

🚨GREENSBORO PAINT UP GUNS DOWN 🗣🗣🗣 LOVE & SHARE THE MOVEMENT 👨🏽‍🎨

The movement first gained traction on social media in early April. It serves as a way to resolve conflicts with paint instead of bullets. Since then, participants from Atlanta to Detroit have engaged in full-blown paintball wars on city streets. As many as 50 shooters are taking aim at each other at once, hitting innocent bystanders and marking up cars and homes.

Reportedly, some of the participants spend thousands of dollars on the gear they need in order to shoot up the entire city. Gangs continue to grow in numbers claiming that “nobody is safe” meaning moving vehicles, homes, and even people you consider to be in you paintball posse.

Paintballers say they’re being targeted for being young and black. They also are saying that cleaning up paint is a lot better than picking up dead bodies. Unfortunately, police are afraid that if this doesn’t stop, that an officer might mistake a paintball gun for an actual gun.

Detroit Police Chief James Craig calls the movement “well-intentioned but misguided”. He went on to say the department has seen a spike in calls related to paintball gun shootings. Receiving approximately 95 recent calls within an unspecified date range.

The department plans to deploy two “enforcement details” to focus on the paintball problem across the city this weekend. So far, police have arrested six people, including a juvenile, who has been charged with disorderly conduct and other misdemeanors.

In the end, a police and black community conflict won’t be solved overnight. It’s refreshing to see one side at least get creative.