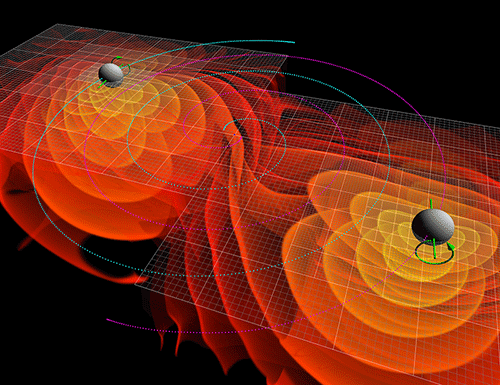 Two black holes are encircling each other. The distance between them is 100 KM. One black hole contains 36 times more mass than the sun, the other black hole contains 29 times. They are both in an orbit motion, only one km or so apart from each other. The are accelerating rapidly. Moments later they become close – to a touching distance. They two holes wobble violently, as trillions of KGs shuffle and redistribute. Behold, a new larger black hole is born.

The black hole has lost some mass though. A mass that is more than the mass of three suns has been lost, as in turned into energy. This energy has formed gravitational waves; ripples are created that travel throughout space, compressing it. During the final stages of the black holes merger, the two holes impelled energy that is 50 times more than the rest of the universe has produced in light, Gamma rays and radio waves combined.

Roughly, 1.3 billion later, there is a small but wonderful planet orbiting the sun in Milky Way. There is an observatory called LIGO (Laser Interferometer Gravitational-wave Observatory).  In September 2015 a small ever-so-faint reading of those waves in detected by scientists of that observatory.

Research is conducted, origins are discovered, traces are made, equations balanced and finally on February the 11, 2016, the scientists announce their findings, the detection of what they have called GW150914, to the world.

The legacy of gravitational waves

This is the first instance where gravitational waves have been discovered by human beings (and hopefully all species). This is a landmark that had been in the wings of mankind since one hundred years – when Albert Einstein first predicted the existence of such waves.

This will allow us to peek into phenomenon that have been unachievable to study in the past. We could, perhaps, look into time as far as the Bing Bang itself.

The first man to give the idea of the existence of such gravitational waves was Albert Einstein. In his theory of relativity, Einstein observed ripples and irregularities in the space and time – of course at that time it was only theoretical. 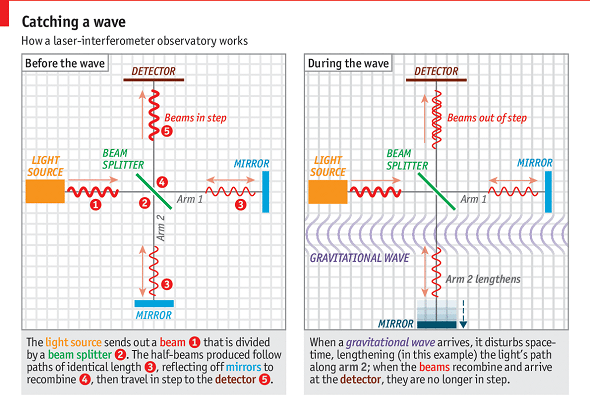 Gravity if the aftermath of an order; where the objects of the universe move devotedly along the space-time. The idea itself is straightforward, but solving it mathematically is a tiresome job. It can be solved only by making some hardcore discoveries that lead to solid approximations. After some tough approximations Einstein concluded that any acerbating mass must make ripples in space-time.

At first Einstein was not too comfortable with the idea. He would make various anti-claims to his own theory. While, he and other scientists were doing equations and redoing all the calculations to come to an acceptable theory, some scientists set course on a different path: to catch the illusive waves while they were stretching and reshaping matter; or so to say catch them ‘red-handed’ in the act.

The problem the scientists faced was experimental drawbacks. It was expected that the transient change in dimensions, equivalent to one-thousandth of a proton’s width. This change could be measured by an apparatus which was spread occur several kilometers across. In theory, proof of gravitational waves’ existence was found at different points in the history. Most effective way of measuring gravitational wave was to measure the radio waves that were emitted from dead stars (also called pulsars) that were similarly orbiting one another (like we discussed in the opening paragraph). Scientists could deduce the waves and alteration of the mass. However, all this could not be concretely proved without an observatory like LIGO.

LIGO can deduct such waves. It splits laser beam into two; they set right angles to each other and a change in the space between them could be observed. The disturbances caused in space when the two beams interfere provides an accurate data about gravitational waves. To be absolutely sure that gravitational waves are what they seem; it takes painstaking measures.

LIGO is a two-part facility; one in Louisiana and the other in Washington. The arm of each observatory is 4KM long and the split beam is bounced hundreds of times between multiple mirrors each observatory holds. Even so, since 2002, when LIGO was founded, no solid wave has been observed – or so was the case until September. 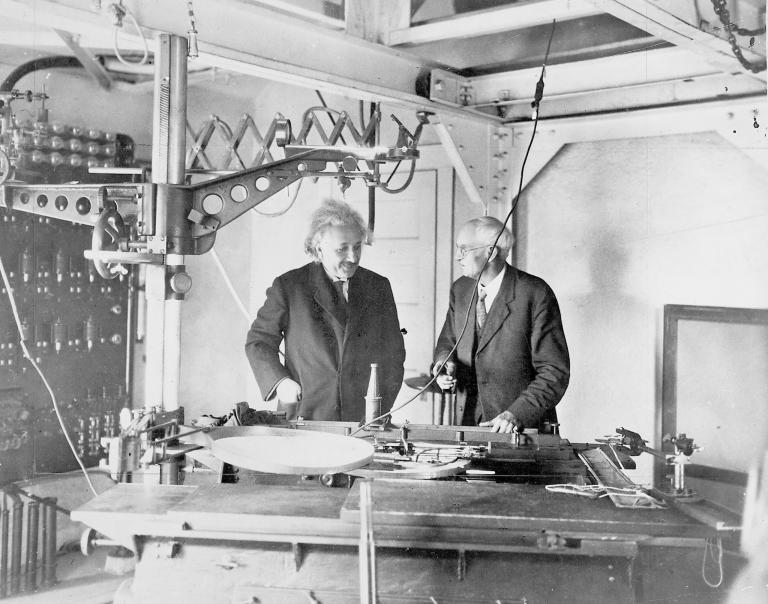 LIGO had to undergo construction in 2010. Massive improvements were made which included; more mirrors, up-gradations to both mirrors and lasers up to a factor of 75. These improvements left LIGO five times more sensitive than it was previously.

tThe upgrading paid up shortly, first part of the GW150914 was detected at Louisiana site and then one-hundredth second later at Washington site. Since the discovery scientists have been conducting more experiments, balancing more equations and also counting their lucky stars. Researchers of the observatory have concluded in Physical Review Letter that the authenticity of the wave is almost certain and the chance that it was chance occurrence are very minimal.

When results come in so thick and fast, a chain of good results is often made. After four months of data and

This is a major step in our understanding of the universe. Predictably, other observatory are in on the search as well. Soon LIGO will be joined by VIRGO, an Italian gravitational wave observatory in Italy will join them. There have been talks about including a new observatory from Japan and also the Evolved Laser Interferometer Space Antenna (e-Lisa) is also in the making.

Einstein’s theory of relativity is incomplete on many levels. Gravitational waves could prove Einstein wrong. Waves provide a direct link to black holes, Einstein was not so sure about black holes. We may get a peek into the Big Bang, something Theory of Relativity has never been able to describe.