Bees are dying off at a rate of about 30% a year, and have been for the past decade. Most people know how incredibly important bees are to our ecosystem, but maybe not the extent of just how important they are to us. According to the Natural Resources Defense Council they are responsible for 30%  of the world’s crops and 90% of the world’s wild plants. Some of our favorite foods they’re responsible for pollinating are: 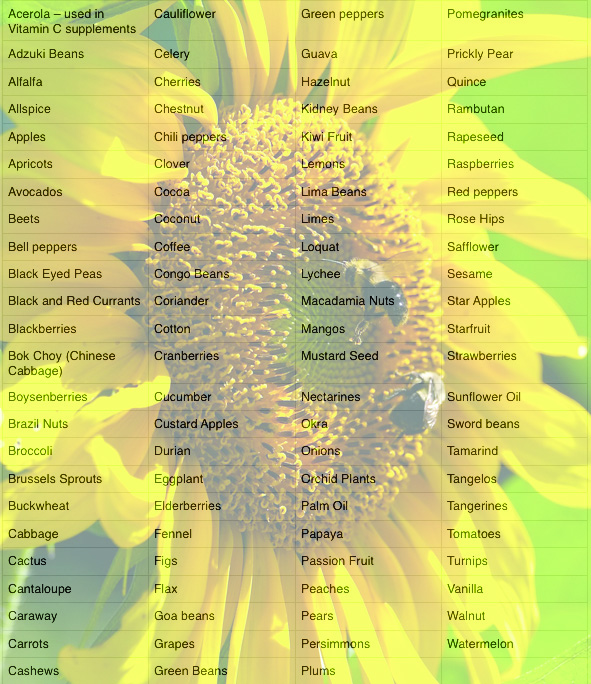 These are all the foods we will lose, if bees cease to exist. Pollinating by hand is far too difficult, and too slow in comparison to what bees could accomplish if we simply helped their numbers climb again.

So, what can we do to help with this issue? First, we must address what is causing their decline. Scientists largely agree that the two contributing factors to the decline of bumble bees are the insecticides used, and the parasites which are natural enemies to bees.

The insecticides are the larger issue. They have been affecting bees slowly starting from the 1980s when Neonicotinoids were first introduced to the crops that were man made. Like the name suggests, one of its derivatives is nicotine. Like all other pesticides, they were simply sprayed on, but over time in order to increase their effectiveness in getting rid of pests — scientists decided to infuse the actual plants with the insecticides. This change in the actual plant made it so poisons didn’t just wash off after some time, but made the plant itself poisonous and anything that came from the plant. So any innocent bee coming up to the plant to take its nectar and share with its hive was essentially slowly poisoning itself and its colony. This might be why the correlation wasn’t made for quite some time.

The map below shows the progression of the use of Neonicotinoids in the U.S.: 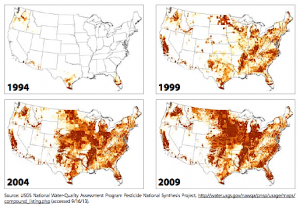 In addition to it being a slow poison it also explains why so many bees have been actually “disappearing”. One of the components of this poison messes with neurological functions, so bees slowly lose control of their motor functions, and end up flying off without meaning to and dying somewhere alone. The use of these pesticides is clearly not an intelligent or humane practice on our part. 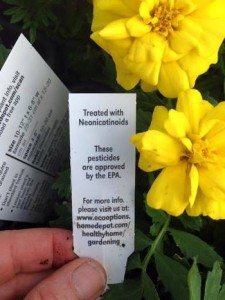 While we can make small fixes here and there, by planting bee friendly plants in our own yards, there’s still a large concern for even our own fruits, vegetables, and flowers to contain this same deadly poison and thus unknowingly perpetuating the issue.

Thankfully, many places like Home Depot have been mandated to place a tag warning of Neonicotinoids on potted plants for sale — allowing customers to make an informed decision before purchasing anything.

But it doesn’t fix the larger problem at hand. 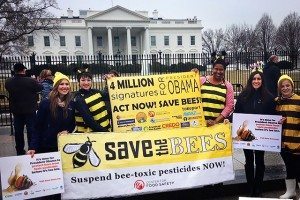 Many people have started picketing at various locations in hopes of bringing media attention to the issue. It certainly has stirred the pot, but as of yet has yeiled no lasting results. Certainly picketing helps, but an individual can also further this cause by doing things like continulously attempting to only buy from farmers who use safe methods for pest control, making it clear you don’t support unethical practices. And also by contacting local representatives, so they then can make state level changes. 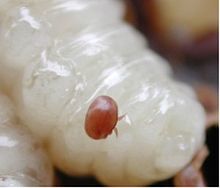 The parasite that most commonly attacks bees is the Varroa Destructor, a kind of mite. The only place they can actually successfully breed is inside of Honey Bee colonies. They attach to pupae and remain attached even into adulthood, weakening them by sucking out their hemolymph. Hemolymph in a bee is equivalent to blood in a human. Sometimes multiples can attach to one bee, essentially draining them dry. 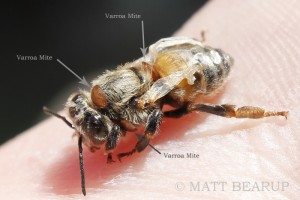 These mites also have a tendency to carry diseases and viruses, like Deformed Wing Virus, further crippling bees when they reach adulthood. The photo on the right illustrates an infestation and deformed wings on an adult bee with Deformed Wing Virus.

Mites are commonly combatted by beekeepers with carefully placed or sprayed miticides, so as not to harm bees or humans that could consume contaminated honey. However, there are also safe options that can help lesson mite infestations like powdered sugar or essential oils.

Unfortunately, unless you are a beekeeper yourself, combatting mites is more a challenge for beekeepers or industries tending to bees for crops. It’s still good to know and be informed on what is affecting these precious helpers, which helped put food on our tables and keep forests alive and thriving.

What You Can Do

Stay informed, and read up on anything you can to make sure you’re not ignorantly adding to the problem. Just because you aren’t aware of how you can be actively adding to the problem, doesn’t make you guilt-free. Ignorance is never a good defense. We need the bees to stay alive, that’s a fact. So the best thing we can do is work together to improve living standards for bees, so that our living standards don’t suffer all around the world. 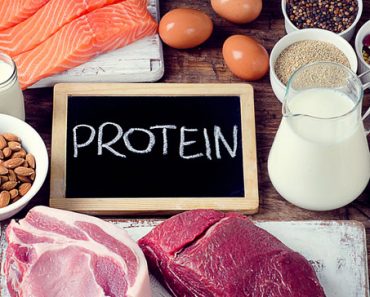