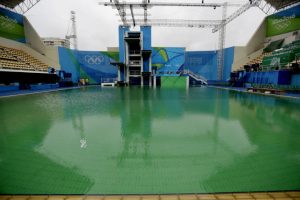 Outrage rippled across social media at the pictures that came in of green pools that olympics swimmers had to endure during their performances and practices — particularly when the reasons beyond their odd coloring were revealed.

Hydrogen Peroxide, a common household cleaner and sterilant of minor wounds, had been dumped into several of the pools. It was no small amount that was dumped, either. It was a whopping 160 liters. Reportedly it was done on accident, but that large amount of hydrogen peroxide lingering around in large vats around olympic pools is suspect, to say the least. 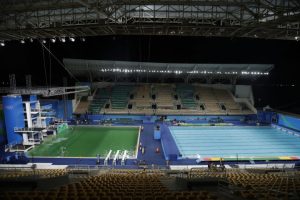 Ultimately, the larger issue was that this caused a chemical chain reaction. Though hydrogen peroxide is frequently used to clean, it was not used in a manner befitting a clean and sanitary pool that was safe to swim in– thus allowing algae to bloom, as well as agitate swimmer’s eyes and bleach the skin and hair of the athletes competing.

(To the right is a comparison of one of the green pools to one of the correctly treated pools.) 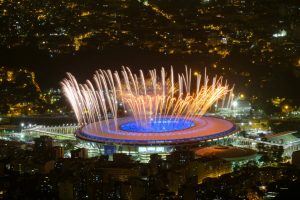 Many online saw this “accident” as a means to get the word out about the injustices or atrocities the people of Brazil face. It might not be a well known fact to many, but it is a true reality to the people of Brazil that the country is experiencing political turmoil as well as wide spread poverty and poor living conditions. Which, might make one wonder how Brazil ever received the honor of hosting the Olympics at all, or how they scraped together to afford the extravagance of the stadium.

Thankfully, there is a silver lining…

Fixes to serious problems are never so cut and dry as a couple of decisions, and certainly what is to come for Brazil after the close of the olympics is no perfect solution — but it will certainly be a positive change in direction the country and her people so desperately need. The olympics notoriously leaves behind decaying buildings and displays to rot once they roll out of town, but not this time around. The International Olympic Committee looked back at the dilapidated stadiums left behind in Athen’s which proved functionless without the games and Beijing’s famous “Bird’s Nest” piece which is used for little more than a minor tourist attraction and local, occasional soccer games and decided something needed to change.

The stadium created for Brazil was built as a multifunctional structure which is being referred to as “nomadic structure”. This means that not only can it be repurposed by having a little bit of literal wiggle room to transform into something more functional once the games end, but can be physically dismantled and reassembled in a way technology hasn’t fully seen or fully utilized before. The plans aren’t too dissimilar to a novelty 3D puzzle. 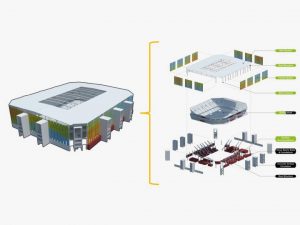 The above concept art was created to show how the stadium can be taken apart and used in several different ways to create independent structures for future purposes. Such plans have been leaked as two public pools, four different schools, and a dormitory at a high school for gifted athletes at the Barra Olympic Park. The repurposing of leftover pieces has yet to be determined, as that reportedly leaves behind the 18,250 seats that fill the Olympic Tennis Centre, as well as the majority of the main souvenir shop.

The committee has given more in depth information regarding the building materials and finer details of how the building comes apart and can be reassembled online. They felt that the most important takeaway of the plans revealed were that there’s a large need to plan more socially, financially, and economically responsibly — not just as the future olympic stadiums are concerned, but in all ways.