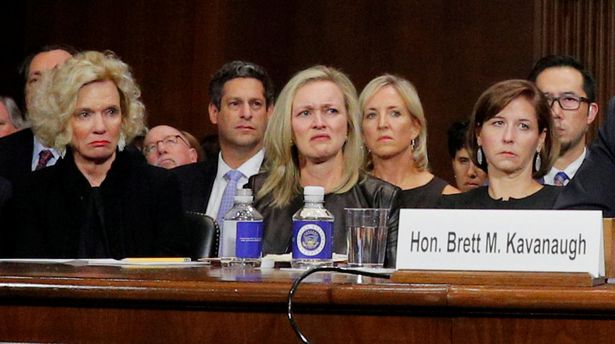 Faces of women sitting behind Brett Kavanaugh sum up the disgust and division in America. Photo: Mirror

Research psychologist and professor, Christine Blasey Ford, recently revealed that she was the author of the letter that had been sent to Senator Dianne Feinstein and Representative Anna Eshoo. A letter that seriously addressed the character of the Supreme Court nominee Brett Kavanaugh.

The Allegations against Kavanaugh

According to Ford, Kavanaugh sexually assaulted her. She was 15 at the time and he was 17. Ford details the sexual assault further by saying Kavanaugh was “stumbling drunk” at a party and corralled Ford into a bedroom with a friend of his. She continues by saying that he then pinned her down onto a bed groped her, grinding his body against hers. She goes on to say that he tried to remove her clothes and when she resisted, he put his hand over her mouth, to muffle her screams.

This attempt at rape was confirmed by a polygraph test that Ford took on the advice of her lawyer.

Reactions from The White House

As you may have guessed, The White House has interests in downplaying negative claims about Kavanaugh. Donald Trump’s advice on countering allegations of misconduct: “You’ve got to deny, deny, deny and push back on these women. If you admit to anything and any culpability, then you’re dead.”

A lawyer close to the White House said that regardless of the claims, Kavanaugh’s nomination would not be withdrawn. The White House is far from treating the allegations with any degree of stated concern. Apparently, they plan to push even harder for its nominee. It is on the grounds that the nominee in question, bedeviled with “accusations,” could be anyone.

The Normalization of Assult

“Boys will be Boys’. A saying we’ve heard many of times used to normalize the poor behavior of the male sex. The more we use this defense, the more we normalize this type of behavior. Saying, ‘boys will be boys’ erases the specific details of this case and covers them with generalized male entitlement. It basically says, ‘what red-blooded guy hasn’t done, in some way, the kinds of things Ford has described?” Fox News columnist Stephen Miller even described the situation as “drunk teenagers playing seven minutes of heaven.”

This behavior is not just kids simply being kids, or boys simply being boys. It is cruelty, it is entitlement, it is violence, and it is assault.