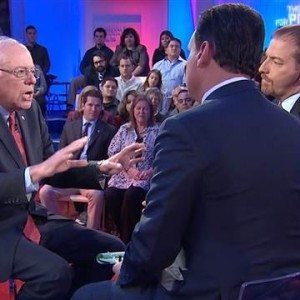 Unlike the treatment CNN’s Anderson Cooper gave Republican Candidates on Wednesday night, MSNBC’s Chuck Todd and Jose Diaz-Balart asked the Democratic Candidates a slew of difficult questions. Secretary Hillary Clinton and Senator Bernie Sanders had to defend their records, several statements made in the past, and questionable framing the moderators and audience.

Senator Sanders was asked a question from a college age student who fumbled over her question. The framing of the question was not natural and was basically asking the sitting Senator if free college for all would be efficient – since it would cost $70 billion per year. The Senator was able to handle the question without faltering, yet it led to an odd moment from Chuck Todd. Todd went out of his way to show Senator Sanders that the question was indeed written by the woman in attendance. Which was seemingly an admission that the questions Sanders was receiving were indeed harsh.

Secretary Clinton also dealt with odd framing as the first question she received accused of her of being an obstructionist during her time in the Senate. She was asked if her voting against Samuel Alito and John Roberts was similar to what current Senate Republicans are doing in relation to the seat left open by Antonin Scalia.

Todd and Diaz-Balart’s performance tonight made it extremely obvious that the notion of a “Liberal Media” is without merit when comparing the treatment of the candidates from both parties.

For the first time during this campaign Bernie Sanders brought his Civil Rights Activism to the forefront. Not only did he acknowledge he was arrested protesting segregation while attending the University of Chicago – he mentioned his marching with Dr. Martin Luther King, Jr. He spoke passionately about his activism which was present in his voice, which may help him with members of minority communities going forward.

One of the most outrageous moments of the debates came when Sanders was asked to defend his Healthcare for All proposal. The Moderators stated that those in Canada and the United Kingdom complained over a rationing of healthcare and long wait times to see doctors. This criticism is not documented, as overwhelming empirical evidence suggests the opposite. On Twitter, Canadian viewers lashed out at the notion of long waiting times.

Studies show that citizens in Canada and Great Britain are widely more satisfied with the quality and cost of their healthcare compared to those in the United States. There is no disputing that the cost of healthcare and medicine is vastly more expensive in the United States than in countries with more progressive healthcare programs. Bernie Sanders was asked to describe why his Democratic Socialism was different from Communist regimes in Cuba and Venezuela that are ruled by dictators.

Senator Sanders was able to deliver his message and did nothing to hurt his current surge of moment going into Saturday’s Caucus.

Secretary Clinton did not do herself any favors with the Hispanic community in Nevada. When asked about her comments regarding if the United States should send a message using the deporting of migrant children, she refused to walk away from the statement which fell flat with the audience. Over 60% of Democratic Caucus goes in 2007 were Hispanic, it’s reasonable 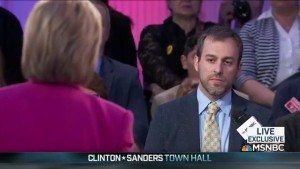 to believe her statement may have shifted some of their support to Senator Sanders – who is within 1-3% points in latest polling. Sanders outperformed the polls in Iowa and New Hampshire by 6%, making that statement from Hillary quite alarming.

Yet, her most interesting exchange happened after a Senator Sanders supporter asked her to release transcripts of speeches she gave to members of Wall Street.

Her response will do nothing to help her among Millennial voters nor those who feel she is a disingenuous politician. In actuality, it may turnout the vote for Sanders as the majority of his support comes from those tired of the status quo. Secretary Clinton also stated that she would not even attempt to fight for a $15 minimum wage at the Federal level – a very important issue for a number of Democratic primary voters.

Bernie Sanders has came out of each Debate and Town Hall polling better than he did going in, with a tight race in Nevada; along with a few questionable responses from Secretary Clinton one can expect he has done enough to secure an upset in Nevada if the pattern holds true. The Clinton campaign has already lowered expectations for the caucus and are hoping she can hold her lead in South Carolina going into the February 27th Primary.