A delivery driver of pharmaceutical company has been charged with plotting to kill US Air Force officers on an air base in East Anglia.

Junead Khan, 25, is a British national and a follower of Islamic State (ISIS), the terrorist organization.

He was found guilty and convinced for planning terrorist activities. The court ruling came out in the early hours on Friday, April 1, 2016. 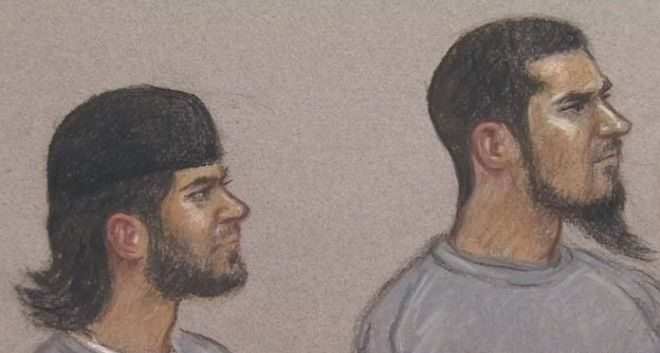 Illustration: Junaed with his uncle Shazib Khan who was charged with same offence. (PHOTO: Julia Quenzler)

Junead was a delivery driver for an unnamed pharmaceutical company. Using it as a perfect disguise, Junead scouted several air bases in Britain. The airbases, were United States Air Force (USAF) stations that included bases at RAF Mildenhall and RAF Lakenheath in Suffolk and RAF Feltwell in Norfolk.

He was also found guilty for trying to join ISIS in Syria. His uncle, 23 year old Shazib Khan was charged with the same offences.

Junead came onto the police radar when his email communication was red flagged. In an email message to Junaid Hussain, a British operative in Syria, Junead said,

“When I saw these US soldiers on road it just looked simple but I had nothing on me or would’ve got into an accident with them and made them get out the car.”

To this, his got the reply from the IS member; “That’s what the brother done with Lee Rigby” (Lee Rigby was a British solider murdered in Woolwich in 2013, allegedly by ISIS inspired British terrorists).

Junead was given plenty of chances to turn away from terrorism, but he didn’t.

British government has an anti-extremism program. Through his program, the police can red flag a person who has an extremist mindset. They can go on and persuade the person to remain a law-abiding citizen before he actually commits terrorism acts.

Junead was approached by police four times in 2014. Every time he mocked them and prevented them for diverting him from radicalism.

Meanwhile Junead continued his radical communications with IS operative Junaid Hussain and his uncle Shazib Khan, who is two years younger to Junead. 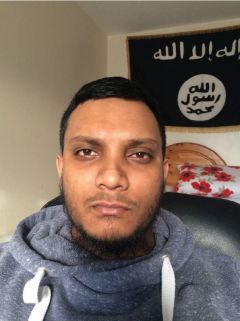 Junaed with an ISIS flag in his bedroom . (PHOTO: Met Police)

In 2015, Hussain sent Junead instructions for building a bomb. The email also instructed him on how to “deal with the police” when they arrived at the site where he was planning the terrorist attack.

This prompted Metropolitan police to arrest both Junead and his uncle Hussain.

Police found hate material and terrorist propaganda video on his computer. They also found out that Junead had planned to buy a knife online. From his home, two flags British and American were also recovered.

Metropolitan police said that flags were “potentially to be used for a symbolic act during the terrorist attack”.

The verdict came out after a trial at Kingston Crown Court that had spanned 6 weeks.

Junead will be sentenced on 13th May.