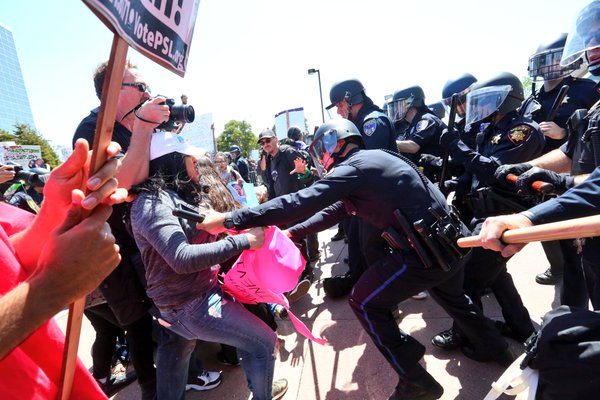 After a night of violent protests that left at least one Donald Trump supporter bloodied in Southern California, demonstrators rallied against the Republican presidential front-runner outside a Bay area hotel, where he was scheduled to speak before the state GOP convention today.

Trump’s speech was delayed and hundreds of protestors gathered outside the hotel in Burlingame, Calif. A number of them held a “Stop Hate” banner. Some protestors broke through barricades before picking them up and tossing them aside. Others linked arms and blocked a road that already had been sealed off by police.

The previous night, violence erupted on the streets of Costa Mesa following a Trump rally at the Pacific Amphitheater. At least one Trump supporter was left bloodied and bruised following a scuffle that ensued as he tried to drive out of the area. 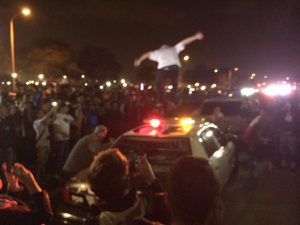 Some protestors blocked a road while waving Mexican flags and leaving dozens of people trapped in traffic.

Several demonstrators told the Los Angeles Times they were there to rally against Trump’s tough stance on illegal immigration, and his claims to propose a giant wall along the U.S./Mexican border.

“This is the anger people have against Trump,” Jose Cruz told the LA Times. “It’s not because he’s white, it’s because of what he’s said.”

The LA Times reported that helicopters circled overhead as protestors shut down the entrance to the 55 freeway along Newport Boulevard.

According to the Costa Mesa Police Department, there were “no major injuries” and the crowds dispersed at about 11 p.m.

Anti-Trump protests were relatively peaceful before Trump spoke at the amphitheater. Protestors taunted Trump supporters who were waiting in line to get into the venue. The two sides exchanged insults.

In one instance, seven topless women with Bernie Sanders stickers covering their breasts stepped into the square outside the amphitheater. They told Fox News they were there to protest Trump’s lack of engagement on gender-equality issues.

“He has, like, done nothing to help with gender equality or women’s rights or reproductive rights or anything,” Tiernan Hebron said. 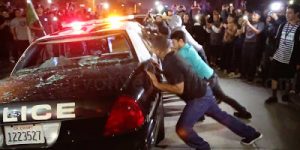 However, the protests turned violent as night fell and more than 18,000 people made their way out of the capacity-filled amphitheater. Hundreds more had been turned away.

“It’s obvious that America loves Trump,” Ly Kou told Fox News as she pointed at the line before Trump’s speech. “This thing about him being racist? Look around the crowd.”

Kou is from Laos.