“Taiwan is very used to earthquakes and tremors, but this is far more significant than the island has seen in quite a while.” Elise Hu told CNN in an interview. 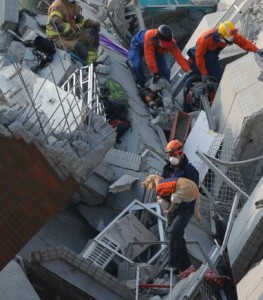 On Saturday, February 6, the people of Taiwan suffered a 6.4 magnitude earthquake. “At least five aftershocks of 3.8 magnitude or more shook Tainan about half-an-hour after the initial quake,” according to Taiwan’s Central Weather Bureau. On Tuesday, February 9, Taiwan was hit by another quake. This one was a 5.1 according to the US Geological Survey.

These quakes came at the worst possible time of year in Taiwan. The Chinese New Year began on February 8th this year. Chinese New Year is the biggest festival in the nation. Thousands of people had already traveled to visit friends and family before the first quake hit. This has made it almost impossible for officials and rescue workers to know who is missing, had traveled elsewhere, or could be dead.

Several high-rise apartments where twisted and collapsed Saturday, leaving an estimated 200 people trapped inside. Most were rescued, but at least 18 have been confirmed dead from inside. 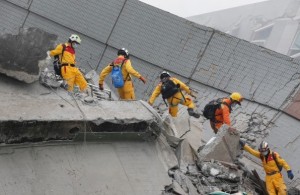 At least 38 have died from the first quake, with no reports available on Tuesday’s quake yet. The BBC reports: “Hundreds of soldiers are involved in the rescue effort, with the help of high-tech equipment, sniffer dogs and cranes. Shelters are being set up for those who have lost their homes in the city of two million people.” 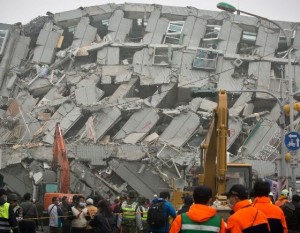 The US Geological Survey has stated that both quakes and the aftershocks were all “shallow”, meaning that the damage to the surface (and the buildings on the surface) was very high.

With the damage to buildings being so extensive, rescue work is slow. “On Sunday, thousands of rescuers worked on different levels of the folded building, which was supported by steel pillars. Rescuer Su Yu-min said they were trying to cut through walls and pillars: “It takes a few hours to complete a search for just one household and sometimes it takes two hours just to go forward 30cm.”” according to The Guardian.

There is still a high risk for aftershocks and the likeliness of finding any more survivors is slowly fading.