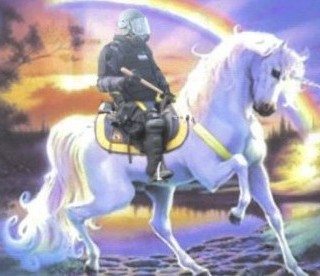 Being a cop in central California isn’t always all ‘rainbows and unicorns.’ But, for CA Highway Patrol officers, there was no better way to describe last week’s 4-hour police chase.

Juliet the pony ran away from a photo-shoot on Wednesday, wearing a spiral horn and pink halters. It took dozens of police officers, four patrol vehicles, a helicopter and a horse, to catch the ‘unicorn’ and return her home safely.

“Unicorn is in custody. Over.”

Juliet ran off at 5:30 p.m. – the peak of rush-hour – dodging traffic on multiple streets and highways near Maders Ranchos. By 6:00, 911 calls poured in from confused drivers, who claimed to have been cut off by a unicorn. Officer Justin Perry was among the first responders. He later described being dispatched for a ‘unicorn’ sighting to KMPH News. 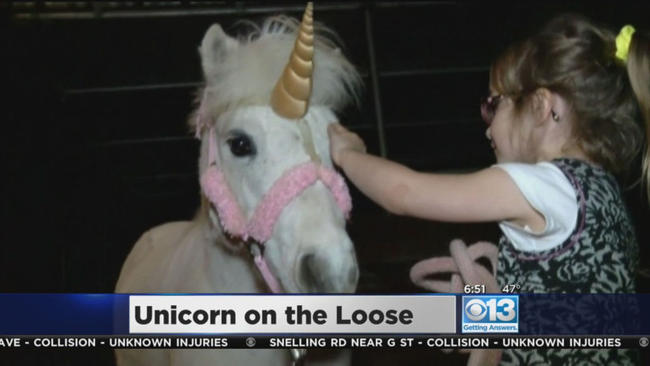 Every time they got close, Highway Patrol scared the white pony away, unable to catch up due to traffic. Juliet was totally out of sight by 7 p.m., when it was too dark to continue searching on the ground.

She eluded capture for another two hours, until being located by a police helicopter’s infra-red scanners. At that point, the pony’s owner – Sandra Boos – retrieved her on horseback. “Juliet came running once she saw my horse, Shady,” Boos said.

Officers were relieved to see Sandra’s tears of joy, as she returned with an unharmed Juliet. After the reunion, they called it in on the radio:

Dispatch, unicorn is in custody. Over.”

Boos, a third-generation horse trainer, doubles as a professional photographer. She says Juliet plays the role of  a unicorn to “make dreams come true” for dozens of little girls on a weekly basis.

But, when the pony threw up her head in true unicorn fashion, even her owner was startled. The passerby holding the pink lead-rope released it, freeing Juliet. In a later interview, Boos said “I assume she knew she got free, so she was like ‘oh, well I might as well run’ and just took off.”

After making headlines, her ‘unicorn’ became the stuff of legends (#unicorn was trending on Twitter). So, Juliet might as well get used to the horn (or horns) – everyone in the state will want a photo with her now. 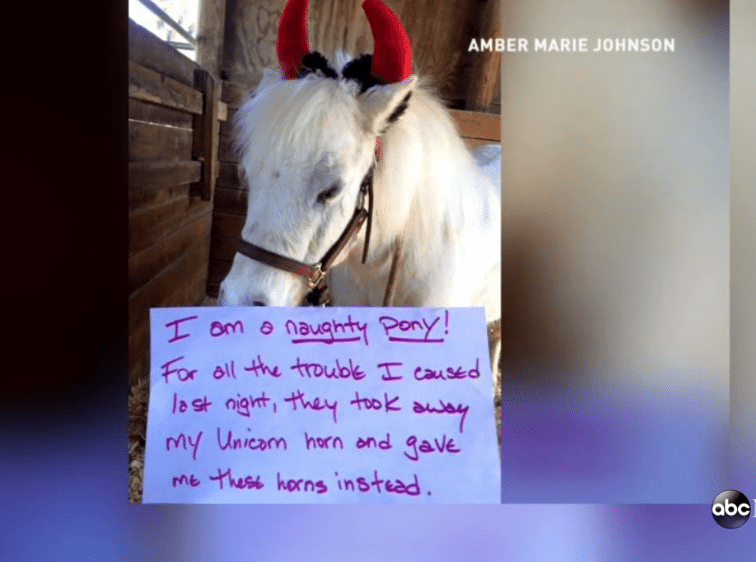