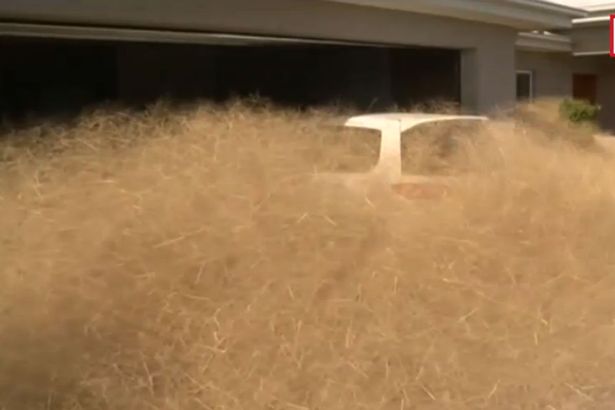 It came from out of nowhere.

It blocked doors and windows. Sometimes, it grew to the size of a rooftop.

It’s called Hairy Panic — giant, fast-growing tumbleweed that pounds parts of rural Australia ever year. This year, it’s different for the city of Wangaratta in Northeastern Victoria. Dry conditions have made Hairy Panic particularly intense there.

Frustrated citizens have had enough.

Some residents are clearing their roofs and driveways several times a day. They’re calling on local officials to take a stand. Several are voicing their outrage on the city council’s Facebook page. Resident Matt Thewlis documented his struggle and posted several pictures to the council page.

His post read, “Hope the person who owns the out-of-control paddocks in our area gets notified to do something because this is a joke and the whole estate is sick of it! … ask yourself this. Would you put up with this every day?”

A council spokesperson told The Guardian newspaper that local officials were deploying street sweepers to “clean up the mess.”

However, he said officials could do very little to prevent Hairy Panic from going where the wind blows.

“It’s widespread. It can happen in any town, at any time, and it does happen in Wangaratta. It just spreads from farm to farm.” 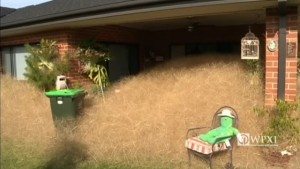 The council has received more than 30 complaints about the grass.

However, he said not all calls came from people affected by Hairy Panic. “Some people are just ringing to talk to us about it, which is fine.”

The spokesperson told The Guardian the council is developing potential “controls” for next year.

According to the Country Fire Authority, the fire risk from the grass is “relatively low.”

Animals that eat it in large amounts can catch “yellow big-head” or photosensitization, characterized by a blistering of hairless or light-colored areas.