2015 is the year when tattoo artists went big on minimalist tattoos. Imagine inconspicuous tiny dots forming a constellation, geometric shapes with nary a shade, linear patterns and delicate curves. 2016 doesn’t seem to be any different as more and more people are embracing the art of minimalism. It’s easy to see why. Minimalist tattoos are subtle, can easily be hidden – really useful when you’re trying to avoid a lecture from your parents at dinnertime or when you’re trying to penetrate the corporate world (because, face it, people are going to judge). Micro tattoos inspire you to get as much creativity as you can squeeze into such little space. And yes, micro tattoos = micro pain. Fans of the minimalist tattoo movement include celebrities Kendall Jenner, Cara Delevingne, Miley Cyrus, Chanel Iman, and Selena Gomez.

Here are 25 minimalist tattoos that are just too beautiful, they have to be shown off:

If you were a child of the ’80’s and ’90’s, you would understand how real the struggle was keeping your Tetris pieces from building up and reaching the top. More important, you would know how immensely important this four-block vertical piece was. This tattoo makes for a great conversation piece, especially with the short attention-spanned kids of today – “Ever heard of Tetris, brah?” – or whatever cool moniker they use now. 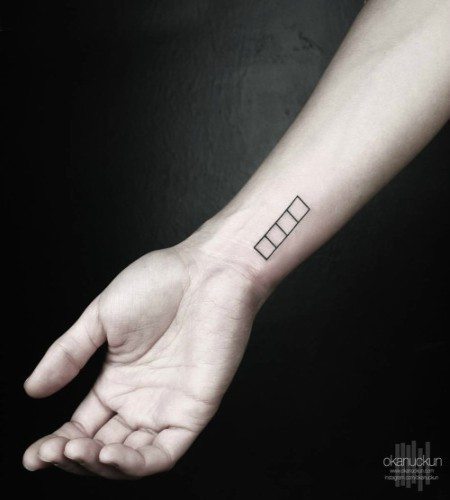