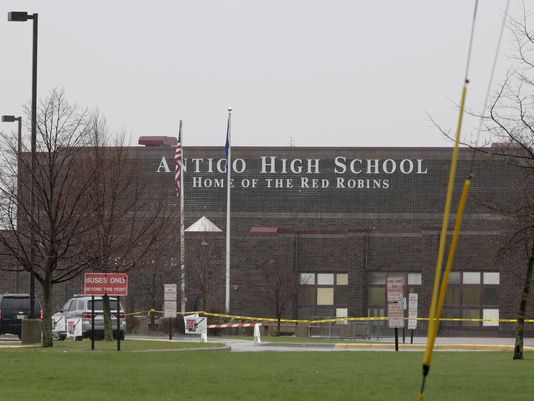 Late Saturday night a shooter (who will not be named) opened fire outside out of Antigo High School in Wisconsin. The shooter injured two individuals – fortunately it is believed both will make a full recovery and did not receive life threatening injuries by reports. Shortly after opening fire Police patrolling the area returned fire and injured the suspect, who later died early Sunday morning at a nearby hospital.

The prom was attended by over 100 students and was suspected to be a fun gathering without any cause for concern until the lone shooter opened fire. The motive behind the shooting is yet to be known or released to the public at large.

The Antigo School District released the following message after the incident:

Parents and Guardians‐
This message is to inform you of a shooting that occurred at the Antigo High School Prom last night. An
individual armed with a rifle wounded two students as they exited the school. Because we had pre‐
arranged to have a police presence, an officer nearby immediately intervened. The shooter never
gained access to the building. A police investigation is continuing, and details of the incident cannot be
released until that is complete. All prom attendees are safe, thanks to the quick police response and
their securing the building. Counseling services will be available in all schools tomorrow, Monday, for
students and staff who may have been traumatized by this terrible incident. We are thankful police and
staff acted quickly together to prevent this incident from becoming a major tragedy. Our first obligation
is the safety of your children. Thank you.

Students are reported as shaken and the school will have counseling services available Monday for any who wish to seek it. While victims were not severely injured physically, we do not know yet of the psychological toll that will take place. Unfortunately, the mainstream media will not focus on that aspect long term and will decide to focus on the shooter as they have countless times before.