The forecast is in the Texas coast is about to be slammed with the strongest tropical storm the US has seen in over a decade. Hurricane Harvey is threatening the state with strong winds, life-threatening storm surge, and torrential rainfall. As reported but the Austin American Statesmen at Midnight Hurricane Harvey has strengthened to a Category 2 Hurricane. So now we ask, what does that mean for the coast of Texas? 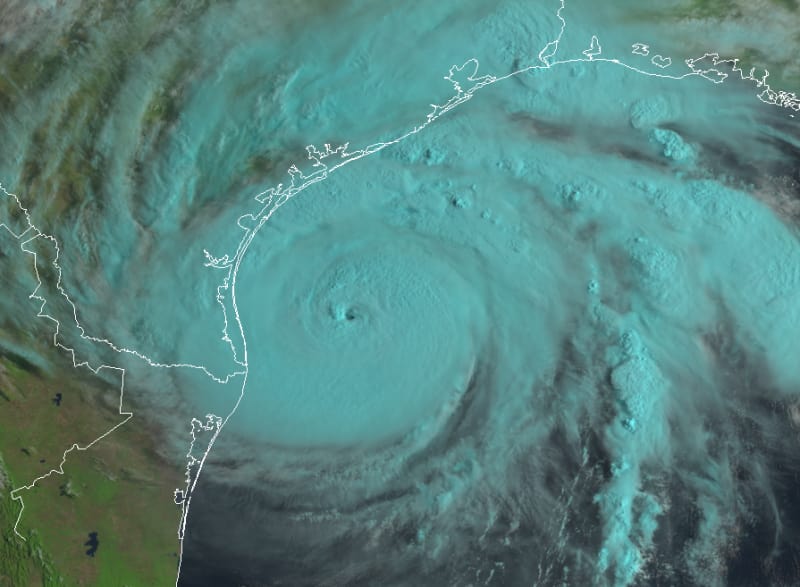 What is a Category 2 Hurricane?

For a hurricane to classify as a category 2 hurricane it has to have wind speeds predicted between 96-110 MPH, meaning the storm surge is about 6-8 feet above normal. Some roofing material, door, and window damage of buildings is predicted with this category of hurricane. We can also expect considerable damage to shrubbery and trees with some trees blown down. Mobile homes, poorly constructed sings, and piers will also see considerable damage. Coastal routes are expected to flood 2-4 hours before the arrival of the hurricane center.

How have predictions changed over the past few days?

So the news first started reporting on Hurricane Harvey yesterday morning. At the time he was just a tropical storm, but has since been predicted to become something much worse. The storm was expected to crash near Corpus Christi very late Friday evening or very early Saturday morning. At around 10 am yesterday the National Hurricane Center reported,

“Harvey has intensified quickly this morning, and is now forecast to be a major hurricane at landfall, bringing life-threatening storm surge, rainfall, and wind hazards to portions of the Texas coast. Preparations to protect life and property should be completed by tonight, as tropical storm-force winds will first arrive in the hurricane and storm surge warning areas on Friday.”

Later in the day Hurricane Harvey was on the cusp of becoming a Category 4 storm. Projections of Harvey’s strength ramped up over the day as government forecasters and scientists went through radar readouts. With that being said, we now know that Harvey has calmed down from projected winds of 130 mph to now only 96-110 MPH. 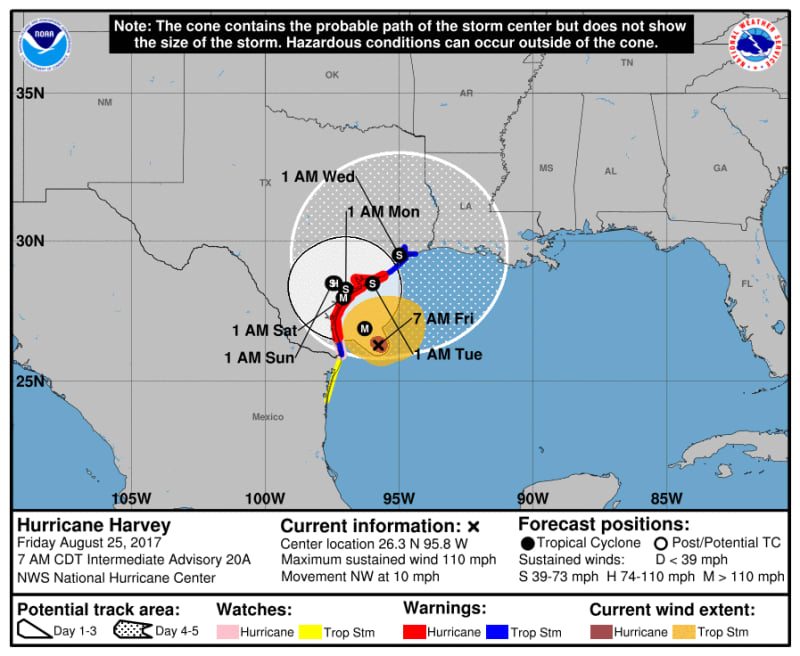 Forecasters have issued their first-ever storm surge warning for the Texas coast stretching from the Houston area to the city of Brownsville. The biggest city directly in the path of the likely major hurricane is Corpus Christi, which has a population of 325,000. There’s a major oil and petrochemical industry in the city, and it’s home to the fifth-largest US port. Residents are being encouraged by City officials to evacuate voluntarily. Many government services are being canceled for Friday, from garbage collection to court dockets.

Harvey is the first major hurricane to strike the US in more than a decade. It also is the first hurricane to make landfall in the US this season. The last time a major hurricane struck the US was Hurricane Wilma in 2005, which made landfall in Florida and left more than 60 people dead. Although the category of the storm has changed, Texas residents are still predicting the worst. Much of Corpus Christi has been evacuated as there are no shelters set up in town.

Four central Texas counties have been put under a tropical storm warning as Harvey approaches the coast. These counties include Hays, Bastrop, Caldwell and Fayette, all of which are just shy of the states capitol, Austin. These counties will likely experience damaging winds of 40 to 50 mph, with gusts of up to 60 mph. Winds these powerful could snap trees, which could break power lines.

See local news sources for up to date information about specific areas impacted by Hurricane Harvey.