Ever wonder why a certain news story wasn’t trending on Facebook even though all your conservative friends were talking about it? The reason may be attributed to left-leaning, 20-something-year-olds working out of the basement of Facebook’s New York office.

According to a former journalist who worked on the trending-news project, employees routinely blocked conservative news stories from trending even though they were being discussed and shared enough to be picked up by Facebook’s algorithm.

“I’d come on shift and I’d discover that CPAC (Conservative Political Action Conference) or Mitt Romney or Glenn Beck or popular conservative topics wouldn’t be trending because either the curator didn’t recognize the news topic or it was like they had a bias against Ted Cruz,” the journalist told Gizmodo.

This individual, who was internally known as a “news curator,” chose to remain anonymous due to fear of violating his non-disclosure agreement.

Another curator told Gizmodo that if a story from a conservative source like Brietbart was organically trending, meaning enough users were posting about it, the topic would make the list only if mainstream media outlets like BBC or CNN were reporting on it.

“Every once in awhile a Red State or conservative news source would have a story,” said one curator. “But we would have to go and find the same story from a more neutral outlet that wasn’t as biased.” 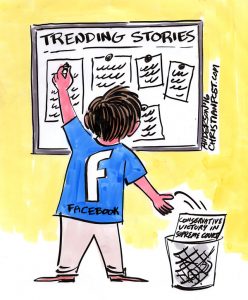 Curators said they had access to a “preferred” list of media outlets which included The New York Times. They also said they could “blacklist” certain topics.

One curator, who is politically conservative, was so perturbed by these omissions that he logged them. Among his notes are topics like Lois Lerner, a former IRS official who was accused of inappropriately scrutinizing conservative groups; Chris Kyle, a former Navy SEAL killed in 2013; and The Drudge Report, a popular conservative-news aggregator.

The conservative curator attributes these omissions to the judgments of his associates. There is no evidence that Facebook management mandated or was even aware of these biases.

However, some curators say management did play a role in deciding what was trending.

Some curators said they were told to “inject” certain topics onto the list even though they weren’t being discussed enough to warrant inclusion. In some cases, these topics made it to the top of the list. Moreover, curators were also told to omit news about Facebook.

These revelations undermine the image of Facebook as neutral source for news, as well as the idea that Facebook’s trending news section is prominently driven by an algorithm acting on what users are discussing. That section is among the most precious pieces of real estate on the Internet. It can potentially decide which news stories are read by more than 1 billion Facebook users on any given day.

The algorithm behind the people who curate the trending news section is constantly changing. And Gizmodo’s exposure may have caused another shift.

Hours after the story broke, the company’s editors began to see the topic trending on Facebook. 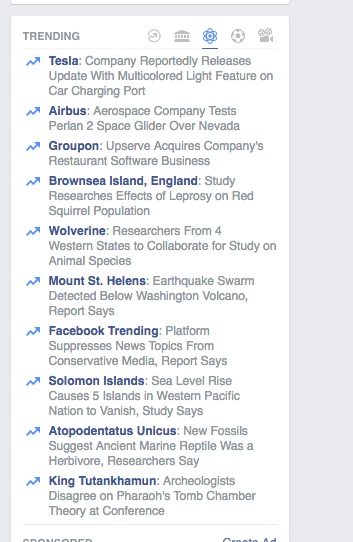 A Facebook statement sent to multiple media outlets on Monday reads: “Trending Topics shows you the popular topics and hashtags that are being talked about on Facebook. There are rigorous guidelines in place for the review team to ensure consistency and neutrality. These guidelines do not permit the suppression of political perspectives.”