I never saw him. I never met him. I chaired the Student Nonviolent Coordinating Committee for three years from 1963 to 1966. I was involved in the sit-ins, the Freedom Rides, the March on Washington, the march from Selma to Montgomery and directed the voter education project for six years. I met Hillary Clinton, I met President Clinton. – John Lewis, Georgia Congressman, on Bernie Sanders during the Civil Rights Movement 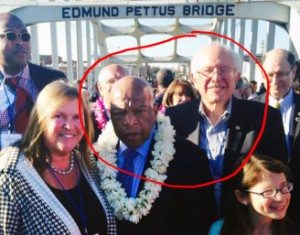 Proof that Lewis has met Sanders and was aware of his Civil Rights activity.

John Lewis’ comments led many to believe he was alluding that Senator Bernie Sanders was not apart of the Civil Rights Movement despite a well documented involvement. Lewis would later apologize stating, “The fact that I did not meet him in the movement does not mean I doubted that Sen. Sanders participated in the Civil Rights Movement, neither was I attempting to disparage his activism.” The clarification from Representative Lewis only came after a fair amount of criticism.

He didn’t see Bernie Sanders because Bernie Sanders was doing fair and open housing in Chicago – that’s why he didn’t see him. No matter how good your eyesight is, if you are standing in Alabama, you can’t see people in Chicago. – Keith Ellison, Minnesota Congressman, critiquing the Lewis statement 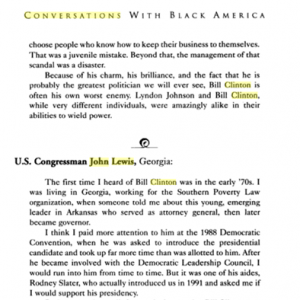 The controversy did not stop there as Civil Rights Activist Shaun King posted a statement from John Lewis where he stated that he met both Bill and Hillary Clinton during the Civil Rights Movement, which stated that he was not formally introduced to Bill Clinton until 1991.

Yet, Representative Lewis also had an explanation for that as well.

If you take a look at a transcript of my statement, you will find I did not say that I met Hillary and Bill Clinton when I was chairman of SNCC in the 1960s. My point was that when I was doing the work of civil rights, led the Voter Education Project and organized voter registration in the South in the 1970s, I did cross paths with Hillary and Bill Clinton in the field. They were working in politics, and Bill Clinton became attorney general of Arkansas in the 1970s as well. That began a relationship with them that has lasted until today. – John Lewis, Georgia Congressman

Unfortunately, Lewis did not admit that he did not meet Bill Clinton until 1991. Yet, he was not the only Clinton surrogate to attack Bernie Sanders in this peculiar fashion.

Not me, but I don’t know any black person who knows Bernie Sanders. – Charles Rangel, New York Congressman

Rangel would continue with his odd criticism of Senator Sanders.

You know I’m probably one of the biggest advocates for Korean Americans that you can find. But I don’t think really if a Korean American was running I am going to get many votes. I mean, you know, so it doesn’t mean that Rangel doesn’t have their interest at heart. I have never been in the position where I had to prove who I am. – Charles Rangel, New York Congressman 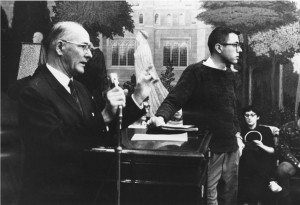 Bernie Sanders in 1962, University of Chicago when he was the President of CORE (Congress of Racial Equality)

Making sense of the odd interview Rangel gave is quite difficult as clearly individuals from all ethnic backgrounds are aware of Bernie Sanders. His extremely baffling statement about Korean Americans and how that relates to Bernie Sanders can only be justified by assuming he means Bernie won’t be able to prove himself among black voters. Which seems to really diminish his long career of fighting for civil rights 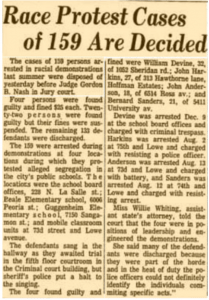 A 1963 clip from the Chicago Tribune mentioning Sanders arrest

and equality for all.

While the timing and rationale for the attacks are transparent – the Clinton campaign is desperate. If Hillary Clinton can not keep a huge margin of black voters supporting her, she will not win the Democratic nomination. It’s in her campaigns best interest to keep from allowing Bernie Sanders history from coming to the forefront.

Why The Attacks Fall Flat

Bernie Sanders does not often bring up his Civil Rights Activism during the 1960s, the issue only comes up when he is asked about it during Debates, Interviews, or Town Halls. What the Clinton campaign has done is allow Senator Sanders Civil Rights record become a talking point among the voters. In the age of the internet, simple Google searches will bring up articles and pictures of Sanders activities during the time period. Yet, it can also bring up some faults of Secretary Clinton as well.

I was also an active Young Republican and, later, a Goldwater girl, right down to my cowgirl outfit and straw cowboy hat emblazoned with the slogan “AuH20.” … I liked Senator Goldwater because he was a rugged individualist who swam against the political tide. – Hillary Clinton, Former Secretary of State, from her book “Living History”

Hillary Clinton supported a man that voted against the Civil Rights Act of 1964. Let’s examine why this could potentially be a problem for a candidate that is depending upon the support of black voters.

…The act outlawed segregation in businesses such as theaters, restaurants, and hotels. It banned discriminatory practices in employment and ended segregation in public places such as swimming pools, libraries, and public schools. – OurDocuments.gov description of the Civil Rights Act of 1964

Despite some online opposition, there is no disputing that while Bernie Sanders was actively fighting for Civil Rights, Hillary Clinton supported a candidate that voted against a legendary piece of legislation that changed the lives of millions of Americans. Unfortunately for Hillary, her own remarks are even more damaging.

…That record, and her statements from that era, should be scrutinized. In her support for the 1994 crime bill, for example, she used racially coded rhetoric to cast black children as animals. ‘They are not just gangs of kids anymore,’ she said. ‘They are often the kinds of kids that are called super-predators. No conscience, no empathy. We can talk about why they ended up that way, but first we have to bring them to heel.’ – Michelle Alexander, The Nation

Earlier in the piece, Michelle outlined just how bad the legacy of the 1994 crime bill is.

…When Clinton left office in 2001, the United States had the highest rate of incarceration in the world. Human Rights Watch reported that in seven states, African Americans constituted 80 to 90 percent of all drug offenders sent to prison, even though they were no more likely than whites to use or sell illegal drugs. Prison admissions for drug offenses reached a level in 2000 for African Americans more than 26 times the level in 1983. – Michelle Alexander, The Nation

There is reason to question why the Clinton campaign would bring up Bernie Sanders history fighting for Civil Rights when she was a staunch supporter of a piece of legislation that is not looked too kindly upon. Especially, when she is on record calling children “super-predators”- it seems to be a huge lapse of judgement by the Clinton campaign. While Sanders did vote Yes on the 1994 Crime Bill due to the inclusion of the Violence Against Women Act and a ban on certain assault weapons; he still gave a powerful speech against the over arching problems with the rest of the bill.

This was not the first time now Senator Sanders spoke out against a bill of this sort. In 1991 he gave a powerful speech against the Violent Crime Prevention Act of 1991.

While Secretary Clinton was using divisive terminology like “super-predators” Senator Sanders was bringing light to issues that were the root causes of crime. As more information regarding the history of Senator Sanders on Civil Rights issues the more support he will gain from black voters. This was a very narrow minded tactic from the Clinton campaign that will definitely backfire in the long run.

Early polling in South Carolina already is leaning towards Senator Sanders making in roads within minority communities, if he is able to win the Nevada Caucus on February 20th, it could make for a very tight South Carolina Primary on the 27th.