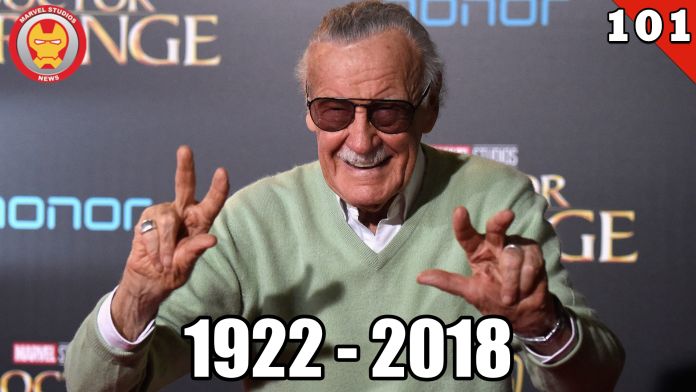 Comic icon Stan Lee has passed away on November 11th at the age of 95. Although Marvel built his career, his influence was felt across comics and entertainment. Lee’s work as Editor-in-Chief of Marvel produced some of the most iconic superheroes that we know today.

“A rich collection of characters grew out of his nonstop plotting sessions with his artists, including the Fantastic Four, Spider-Man, Thor, Iron Man, the Hulk, the X-Men, and more,” Marvel’s obituary reads. “Today, it would be almost impossible to find a corner of the Marvel Universe that Stan didn’t have a hand in.”

Growing up, Lee would read whatever he could get his hands on. In an interview with The New York Times, he admitted to buying a book whenever he could. When he first started at Timely Publications as an office gofer, Lee made $8 a week.

The first comic he contributed to, “Captain America Comics No. 3” (1941) initially sold for 10 cents. Today, one page from that same comic is $3,495. “Amazing Fantasy No. 15,” which marks Spider-Man’s first swing into comics, holds the record for the second most expensive comic book ever sold. In 2011, the Stan Lee/Steve Ditko piece sold for a whopping $1.1 million. “Action Comics No. 1,” sold for $3.2 million and is notable for its debut of Superman.

Aside from the iconic characters that he co-created; Lee also established the first inklings of a shared continuity between properties. More importantly, Lee also advocated for the regular inclusion of a credit panel on the splash page of every book that was published. This not only properly credited the writer and artist, but also inkers, colorists, and letterers. Lee often collaborated with artists on stories, a technique that became affectionately called “the Marvel method”. By having a critical but limited hands-on approach, Lee was able to build the Marvel Empire throughout the rest of the decade, page by page.

The new millennium would see Lee’s meteoric rise as the world’s most famous comic book personality. Lee’s cameos began to increase as a result, with his first speaking role coming in 2003’s Hulk. Just about every Marvel movie thereafter would feature Lee in some sort of appearance, even if he was only tangentially related to the property. Outside of appearing in Marvel movies, Lee also kept busy making a living off of his public appearances and various non-Marvel projects.

But as much as the last few decades have been crucial to cementing Lee’s persona, it also began to challenge his legacy. It would be irresponsible to talk about the impact of Stan Lee’s career without at least touching upon the controversy that surrounded his career. Suffice to say that the estates of both Jack Kirby and Steve Ditko have challenged Lee’s claim to so many characters, citing minimal input in certain occasions. Aside from this, Lee’s last few years saw numerous lawsuits, allegations of sexual misconduct, and elder abuse by Lee’s handlers. It’s a rather unfortunate end to a life that lasted nearly a century. But unfortunately, it’s all too common among comic book creators.

We won’t know for some time how these things might affect Lee’s legacy as a whole, but we do know that it also doesn’t change the impact he had on people.

A World of Warmth

What is so incredible about Lee is how happy it made him bring such positivity and warmth to the world. Lee’s contributions to comics managed to change lives for the better. Lee championed comic books as a method for teaching children and inspiring them to read. He also gave people who felt like outsiders, misfits, and geeks a sense of belonging with his storytelling.

Lee’s stories managed to tap into some cerebral part of the public in that resonates even stronger today. With the exception of George Lucas, there really hasn’t been a creator or a celebrity with more influential on the past century than Lee. There are many who owe their careers and livelihoods to Lee. Even Superhero Hype itself wouldn’t exist without Lee’s influence. His impact on the public consciousness can’t be overstated, both in terms of creative and business foresight.

There’s no other way to put it. Stan Lee is an absolute legend. And his impact is likely to remain for a very long time. What will never change is the fact that Stan Lee was a man who changed the world for the better. In the words of Lee, Excelsior!