The presenter asked Suu Kyi some difficult questions regarding violence against Rohingya Muslims, her biographer revealed on Firday. 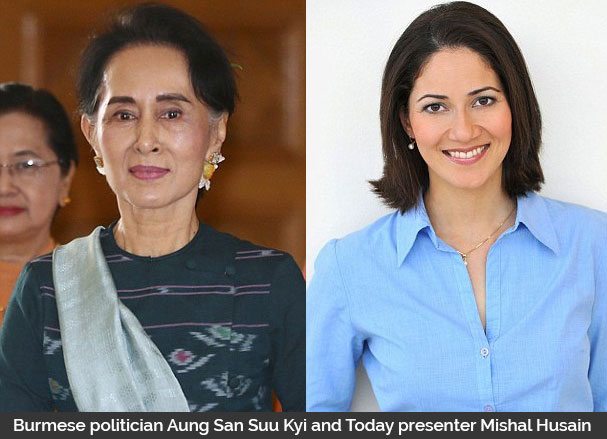 The Noble Peace Prize winner allegedly said, “Why didn’t anyone tell me I was going to be interviewed by a Muslim”. She was off-air when she made the remarks after a seemingly tense interview in October 2013. The interview was conducted by with BBC’s news presenter Mishal Husain, who has Pakistani origins.

The shocking claim has been made by The Independent newspaper journalist Peter Popham. Popham is the author of Suu Kyi’s biography “The Lady and The Generals — Aung San Suu Kyi and Burma’s Struggle for Freedom”.

In the BCC interview, senior journalist Mishal had asked very difficult questions from Suu Kyi. She posed questions regarding the plight of Rohingya Muslims, a persecuted minority in the Buddhist dominated country. People of Rohingya have faced one of the world’s most atrocious bouts of violence in the recent human history.

Seemingly not having good answers, Suu Kyi said that the violence was not “religion based”. She claimed that both Muslims and Buddhists have been the victim of violence that spreads beyond ethnicity. And that there is fear on both sides.

Popham wrote about Suu Kyi’s outburst in an article that was published in The Independent on Friday. He claimed that many “reliable” sources had verified the claim and it “surely happened”.

Suggestive.com has made attempts to contact Mishal Husain, the BBC journalist to verify this claim. Currently awaiting her comments, we will publish them soon.

Suu Kyi has not been free of controversy. Many people around the world have titled her peace efforts as “farce”. In last year’s November polls, Suu Kyi’s party did not field any Muslim candidates. Experts say that was a clear cut indication of giving preference to anti-Muslim Buddhist nationalists.

Suu Kyi is all set to become Myanmar’s foreign minister, in the country’s first public government in decades. Her party won the 2015 elections but she was denied presidency due to a ‘junta-drafted’ constitution that won’t allow a person with two British national sons from her late husband to get the highest post.