Since launching his Presidential Campaign back in July 2015, the Ohio Governor has mostly been an after thought. Not even Washington insiders gave him much of an opportunity to come out of a crowded Republican field as the GOP nominee. After his strong 2nd place finish in the New Hampshire Primary and his constant professional debate performances, he stands as the “adult” out of the remaining six candidates.

What Makes Kasich Stand Out

…When we take the drug addicted and we treat them in the prisons, we stop the revolving door of people in and out of prisons, and we save $22,500 a year. Guess what else? They get their lives back. And the working poor, they’re now getting health care. And you know that about a third of the people who are now getting that health care are people who are suffering very serious illnesses, particularly cancer. So, what I would tell you is, we’ve gone from an $8 billion hole to a $2 billion surplus. We’ve cut taxes by more than any governor in America by $5 billion. We have grown the number of jobs by 400,000 private-sector jobs since I’ve been governor. – John Kasich, Ohio Governor, Responding to a question on his Medicaid expansion

…Now, the fact of the matter is, we expanded to get people on their feet, and once they’re on their feet, we are giving them the training and the efforts that they need to be able to get work and pull out of that situation – John Kasich, Ohio Governor, Responding to Governor Jeb Bush critiquing his record 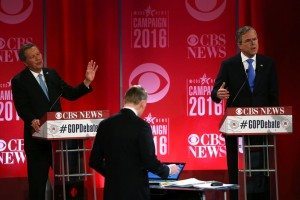 He is the only voice on the Republican side that is delivering a message of peace and the willingness to govern. At the debate Saturday he kept out of the constant arguments between Donald Trump, Marco Rubio, Ted Cruz, and Jeb Bush, which should work to his benefit.  If he can look Presidential while the rest of the field continues to denigrate the narrative on the Republican side – Governor Kasich could emerge as the alternative to Donald Trump. Comments delivered by Kasich later in the debate drove that message home.

Before I get to that, this is the ninth or 10th debate. What I’ve been watching here, this back and forth, and these attacks, some of them are personal. I think we’re fixing to lose the election to Hillary Clinton if we don’t stop this. I mean, the fact is — you know what? I would suggest, why don’t we take off all the negative ads and all the negative comments down from television and let us just talk about what we’re for, and let’s sell that, and the Republican Party will be stronger as a result… – John Kasich, Ohio Governor

While that is unlikely to happen; which the Governor is well aware, the narrative paints him as the one that is fighting for the soul of the party. Yet, it allows him to stand up as an individual that can stand for Moderate Republicans and could appeal to Independent voters as well. 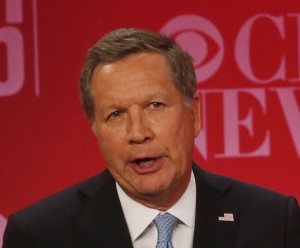 ..But I think I’m a uniter, I think people sense it. I think they know I have the experience, and that I’m a man that can give people hope and a sense that they have the opportunity rise. And I’ll tell you, I love these blue-collar Democrats, because they’re going to vote for us come next fall, promise you that. – John Kasich, Ohio Governor

Kasich has the best opportunity to capture Independent voters and Republicans that have become disillusioned with Donald Trump and his non conventional tactics. Kasich’s mainstream appeal would create problems for the Democratic Party if Hillary Clinton ends up securing the nomination.

How Kasich Can Defeat Trump 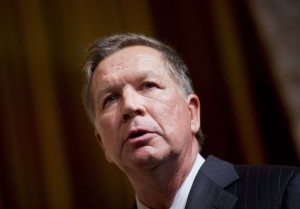 The path for any candidate to defeat Donald Trump for the Republican nomination will definitely be strenuous. If Kasich is to make believers out of the GOP electorate he will need to place 2nd or a strong 3rd at the February 20th South Carolina Primary. If he is able to do so, the case will be made on a national level that the likes of Rubio, Cruz, and Bush should think about leaving the race. Ben Carson will most likely be suspending his campaign after South Carolina, as he is not expected to perform very well.

Senator Rubio could leave the race if places in 4th or worse, which is also not out of the realm of possibility. There could be a scenario where after the GOP Nevada Caucus on February 23rd the race could be down to Kasich, Cruz, and Trump. If that were the case the establishment of the Republican Party would rally behind Kasich giving him a great opportunity to secure the nomination.

While the odds may not be in the favor of anyone overtaking Trump for the nomination, Governor Kasich presents the best person to do that and give the GOP a realistic opportunity to win the White House in November.