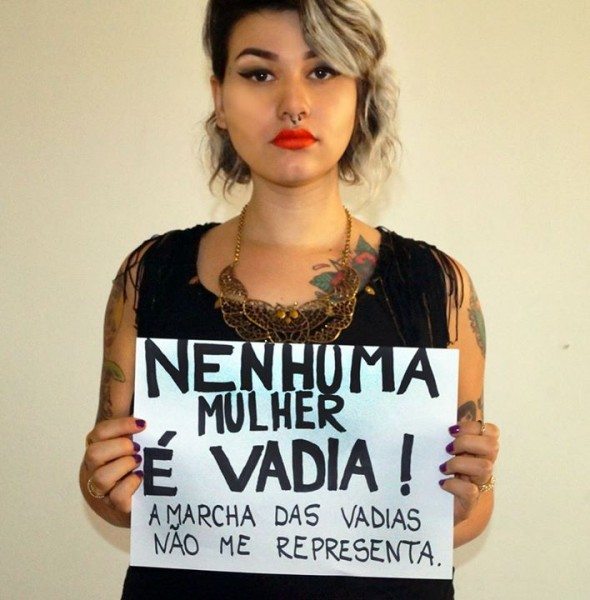 As an activist, she used to chain herself to fences in protest at chauvinism and sexual violence. She was, by her own admission, one of the most high-profile feminists in Brazil.
Sara is certainly striking. She has peroxide blonde hair, tattoos, and a snappy dress sense. But the thing that stands out the most is the badge she is wearing on her top. It is a picture of a skull with a knife through it and two guns.

“They climb into the favelas and kill the bad guys. They put their lives at risk all the time to save the population of Rio.”

It is not the sort of comment you would expect from a liberal activist. But Sara has had a political about-turn in recent years.

Six years after having an abortion, Sara became pregnant again. Between the two pregnancies, she had regained her faith in the Catholic Church and her views on pregnancy – and politics – changed radically.

“I was so happy because I felt that God was giving me a second chance to be a mum,” she recalls.

“I decided to come back to the Church and I think I can help women much more with conservative politics than feminism.

“[I spent] five years being the most popular feminist in Brazil and I did nothing for women,” she says. “I just spent this time talking about abortion and legalizing drugs and communism and I called that empowering myself.”

Sara’s U-turn is unusual but it mirrors to some extent what is happening in Brazil.

For more than 15 years, Brazil was governed by the left. Former President Luiz Inácio Lula da Silva rose to power in 2003 promising change.

But with the country’s most loved politician now facing 12 years in prison for corruption, and with his successor Dilam Rousseff impeached, people are disillusioned. The left did not deliver, so people want change.
‘Brazilian Trump’
Sara’s political idol is the far-right presidential candidate Jair Bolsonaro.

Many refer to Mr. Bolsonaro as the “Brazilian Trump”, the two are very different men in very different countries but the similarities, or rather the set of circumstances that allow them to both exist, are uncanny.

Mr. Bolsonaro brands himself as different from all the rest, a clean candidate amid a sea of corrupt politicians that have been the talk of Brazil for the past few years.

He has been accused of being homophobic and told a congresswoman she was not worth raping. He has ranted against minorities and has called for looser gun laws.
Jair Bolsonaro does not hold back.

But Sara will not have a bad word said against him. “I know it sounds really awkward, but really, if any woman could see Bolsonaro’s policies, she would be in love, like me!”

She gushingly talks about one of his proposals – chemically castrating rapists.
“We have so many feminist congresswomen, why didn’t they suggest this before?” she asks. “Bolsonaro did it.”

A wider vision of the right?

While the MBL essentially remains a movement, some of its members have entered politics on other parties’ tickets.

Twenty-one-year-old Fernando Holiday may be one of the MBL’s leading figures but he ran for and won a seat as the city councilor in São Paulo for the Democrats party.

An unusual poster boy for conservatism, he comes from a poor family and is gay.
He thinks young Brazilians had, until recently, become disengaged with politics.
“The right became synonymous with more conservative politics, irrelevant for minorities,” he says.

“It also became associated with authoritarian, even nostalgic feelings about the dictatorship, like Bolsonaro.”

“But I think we bring a wider vision of what the right is,” he explains. “Not everything fits into a standard box and is determined by rigid rules.”