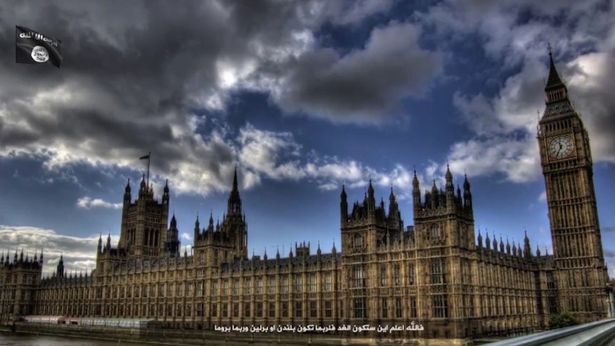 In a recently-released video, the Islamic State threatens to attack “Nations of the Cross.” The video, produced by the terror group’s Alwa’ad media arm, shows archival footage and computer-generated imagery of attacks on the West.

A voice-over of a man speaking in English with a thick Arab accent can be heard saying, “If it was Paris yesterday… tomorrow it will be London, or Berlin, or Rome.”

The video titled “Fight Them; Allah Will Punish Them by Your Hands” was posted last night on various social media channels used by ISIS.

It contains CGI footage of the Eifel Tower collapsing. According to the Daily Mirror, the footage appears to have been taken from the American video game “Call of Duty: Modern Warfare 3.”

The video also features a computer-rendered image of Britain’s Parliament underneath a dark, gray sky before the voice threatens Christian nations. 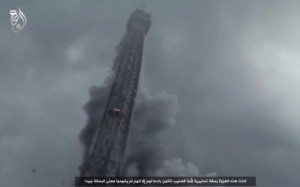 Referring to November’s Paris attacks which killed 130 people, the voice says: “The soldiers went out to the ground and street of Paris and killed the kuffars [non-Muslims]. This invasion was just a cautionary message to the nations of the cross.”

ISIS has been known to execute members of Christian populations in captured territory throughout Iraq and Syria. Last month, Secretary of State John Kerry declared that ISIS was waging genocide against Christians and other ethnic minorities.

“We know that [ISIS] has threatened Christians by saying that it will, quote, ‘conquer your Rome, break your crosses, and enslave your women,’” Kerry said to an audience in Washington last month.

The Rome Coliseum is targeted in the video.

ISIS also used the video as a recruitment tool. Images of jihadist fighters were spliced together with the words, “We will march to the state of paradise where our maidens wait.”

Following the terror attacks that killed 32 people in Brussels, intelligence officials told the Associated Press that ISIS had trained at least 400 fighters to launch attacks on Europe. Before being killed in a raid, the ring leader of the Paris attacks said he had entered the country with a multinational group of about 90 fighters scattered “more or less everywhere.”