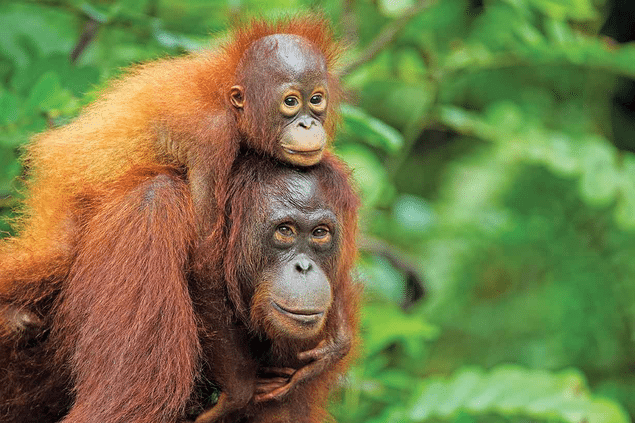 Earlier this month, an orangutan was found brutally shot to death in Borneo. In January, one was found decapitated and floating in a river. In 2017, oil plantation workers were accused of killing and eating one of the island’s orangutans.

The comprehensive study pulled from data collected by 38 different research organizations. When Maria Voigt, the study’s lead co-author and a researcher from the Max Planck Institute for Evolutionary Anthropology and the German Center for Integrative Biodiversity Research, crunched the numbers, she found just under 150,000 Borneo orangutans were lost between 1999 and 2015—roughly half the population.

Orangutans exist on only two islands — Sumatra in Indonesia and Borneo, which is shared by Indonesia, Malaysia, and Brunei.

Indonesia and Malaysia have for decades struggled to curb deforestation and illegal logging, losing swaths of tropical forest to palm oil and paper plantations, as well as mining, destroying crucial orangutan habitat.

The study found, however, that the steepest declines were not from land clearance, but in forests that were fully intact or only partly logged.

“We found that around 70% of the total loss occurs in primary forest areas or selectively logged forests, so the only explanation is that they are being hunted by people,” said Serge Wich, a scientist in the team from the Liverpool John Moores University.

There are a number of reasons orangutans might be intentionally killed. In regions where it’s not taboo, some orangutans are killed for food. More commonly, farmers kill the primates to prevent them from eating crops, or they might be killed in self-defense.

“We have to somehow make it not cool to kill an orangutan,” says Wich. In addition to conservation dollars that set aside land or fund reintroduction of captive individuals, Wich says more money needs to be spent on information campaigns.

“Sometimes people kill orangutans because they’re fearful. We have to convey that they’re not dangerous. The chances they’ll attack are very small,” he says.